​The School of Disobedience is coordinated by Anna Ádám in collaboration with the company Gray Box. 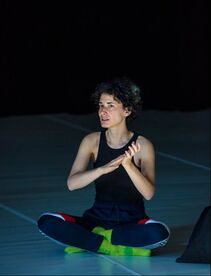 Anna Ádám is a Paris-based maker and artist. Her work blurs the boundaries between choreography, image and object, with the body and movement as central elements of expression. Anna also considers education and community building activities as part of her main artistic medium. At the intersection of a workshop and an interactive performance, she creates and curates non-judgmental and non-hierarchical political soft-spaces for moving, experimental contexts for producing knowledge and tools, sharing learning and unlearning processes, developing new forms of relational aesthetics based on inclusion, connection, co-creation and solidarity.
Anna has also a significant teaching experience in art and performance education (Academy of Fine Arts Vienna (AT), Conservatory of Dance and Choreography (AM), University of Artois (FR), University of Novi Sad (SRB), ZfinMalta National Dance Company (MT), Mediterranean Dance Center (HT), Dance City Theater Newcastle (GB)...).​
www.annaadam.net
www.instagram.com/AnnaAdamStudio 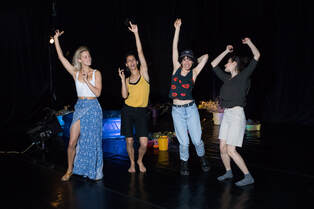 Created as a collective in 2014 in Berlin, and founded as a company in 2018 in Paris, Gray Box’s work takes interest in going beyond the boundaries between performance art and social sciences. Based on transdisciplinary research and collective experimentation, our company creates, curates and produces, in all horizontality, a body of work with a strong political, ecological and social dimension. We consider the moving body together with its immaterial aspects - such as perception, empathy, emotions, intuitions - as a political tool to forge emancipated communities, create social connections and human interactions. By exploring the ideological, cultural, political and historical parameters that shape our taste, what is meant by “popular culture” and “canonized culture”, by “good taste” and “bad taste”, “high culture” and “low culture”, Gray Box is interested in how anti-canonical and anti-contemporary aesthetics can be used as a means of opposition to class hierarchies, and how they can become a tool in the struggle against normative behaviors and dominant ideologies. Faced with an overproduction of artistic proposals, Gray Box believes in a new economy of the performing arts: less fast, more local, more sustainable and more ethical, with the hope to stop geographical divisions, and to respond to the evolution of social and environmental issues of our time. By deciding to perform mainly in alternative, remote, small, lesser-known and outlying places, the company wishes to, on one hand, address a large and diverse audience and, on the other hand, to free itself from the obsession with career, fame, glory, this race for novelty and visibility generates. Gray Box tries to create and co-create its projects with and for the inhabitants, the users and the local associative fabric in order to create bridges between those who have access to art and those who do not. We believe that art can be used as a tool for social justice, that art can make the difference. ​In the past years Gray Box has performed across Europe (FR, D, HU, SB, HR, AT...), in major cities and small towns alike, in formal and informal, indoor and outdoor spaces. We have been in-residence with many theaters and at universities (FR, HU, SB, AM, AT...), and held workshops for both professionals and non-professionals, adults, teens and children, in art spaces, conservatories, festivals, camps and nightclubs.
www.grayboxprojects.com
Instagram.com/grayboxprojects
Facebook.com/grayboxprojects