Franco-Hungarian choreographer Anna Adam will work on her upcoming performance, “Right for Fight”, composed of a series of duets, performed one after the other, such as a boxing match.
​
The creation of the “Right for Fight” performance is composed of two parts:
​At “Klara i Rosa”, in the frame of a series of "thematic movement research labs" of the "School of Disobedience", amateur and professional participants will be invited to experiment both parts and participate to two final public performances in two different types of venue: a gym with a boxing ring and a theater.

“Right for Fight” is not about the beauty of love, but about brutality. Tears, pain, tension and violence. Flowers and aggression again. It’s about all those everyday aggressions which don’t operate with the classical iconography of violence, so you can hardly recognize them: they are nearly invisible, like a stifling mirage, heavy fog…

“These fights are not spectacular, nearly you can’t notice them. Sometimes it's only later that you realise you've been attacked. When you suddenly realise that you didn't defend yourself, you didn't stand up for yourself, you were used, abused, manipulated... And these invisible aggressions are the most dangerous. You don't know where it's coming from, when, in what form, with what purpose…”

What are the distorted beliefs about care, support and love that justify and legitimate the presence of violence in a relationship and where do they come from? How can we recognize, avoid and fight them?

“Being defenceless, being a target, being naked, being unprotected. Being under the control, the heel, the power, the domination. Being vulnerable and completely dependent.“

From love to hate, blindness to open eyes, desire to boredom, harmony to conflict, we want to stay but leave, end but continue, take care but hurt, open but close. Full of contradiction, oppositional emotions, ambivalent reactions, passionate and irrational choices, this upcoming performance conceives love as a universal combat sport without protective equipment, in which vulnerable fighters constantly rewrite rules, negotiate power, fight with each other, for each other, against each other, next to each other…

Why are people so willing to humiliate people from other social groups? What are the factors responsible for psychological and physical aggression? What are those aspects of human nature which lead to social exclusion? What are the cognitive, affective and motivational components of intergroup brutality? How can we resist, protest and fight against domination and oppression? What are our tools and how can we use them?

Through discussions (based on readings, life experience, self-examination) and movement-based implementation (performance, choreography, dance, creative writing…) participants will trace the history of different forms and levels of domination, including institutional, interpersonal, and unconscious, their similarities and differences. They will discuss and write with words (creative writing) and movements (choreographing) the experience of living with "alienation", whether it is due to race, sex, sexuality, class, ethnicity, religion or an intersection of these, the ways in which the theoretical texts we discovered relate to their personal experiences and to local and global socio-political contexts.

Final showing: Following the last lab, participants will present the “Right for Fight” performance to the public in two different venues (a gym with a boxing ring and a theater).

On the intersection of free dance, intensive physical exercise, and intuitive martial arts, participants experiment and practice movement improvisation, play fight, self defense, and cardio techno-fitness. Unlike any rule-based sport or technique-based dance style, this positive and energetic methodology emphasizes the use of natural and everyday movement, develops body strength, the capacity of confrontation, and resistance. It conditions the mind, the spirit, and the body for the realities of domestic and systemic violence (such as physical, emotional and sexual abuse, control and intimidation, isolation, and verbal aggression), and provides for a high degree of personal awareness and self-confidence. Following instructions and thematic exercises, participants are encouraged to raise their voice, challenge social norms, gender stereotypes, and dominant ideologies, develop their capacities to revolt against others' judgements, expectations and oppression. In an exclusively female group, they learn the difference between acceptable and unacceptable, rehearse to say "no" and shout for "help" when it’s necessary, recycle denials and fears into self-empowerment and courage. As an art form, this methodology focuses on both shape, theory and aesthetics, and gives birth to unexpected group performances, beautiful human experiences, and empathic communities.

performed in a gym with a boxing ring 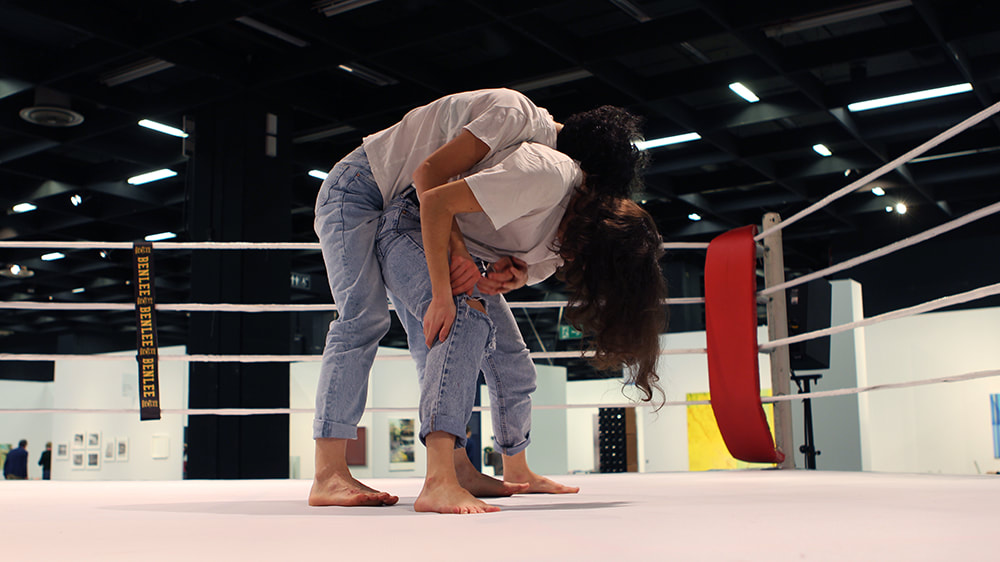 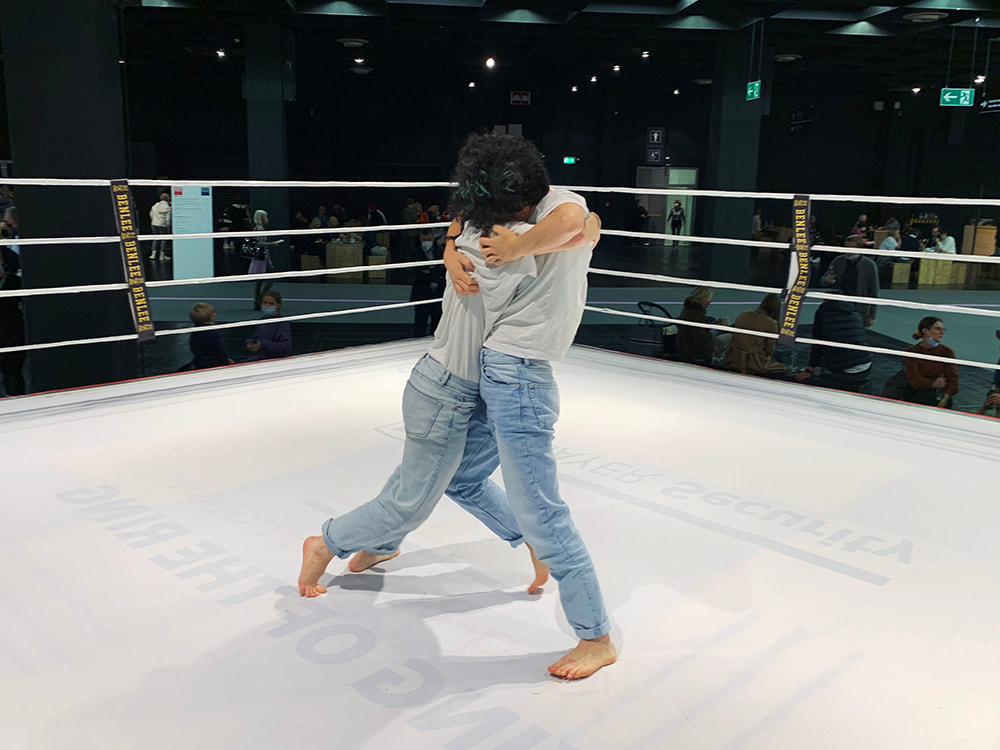 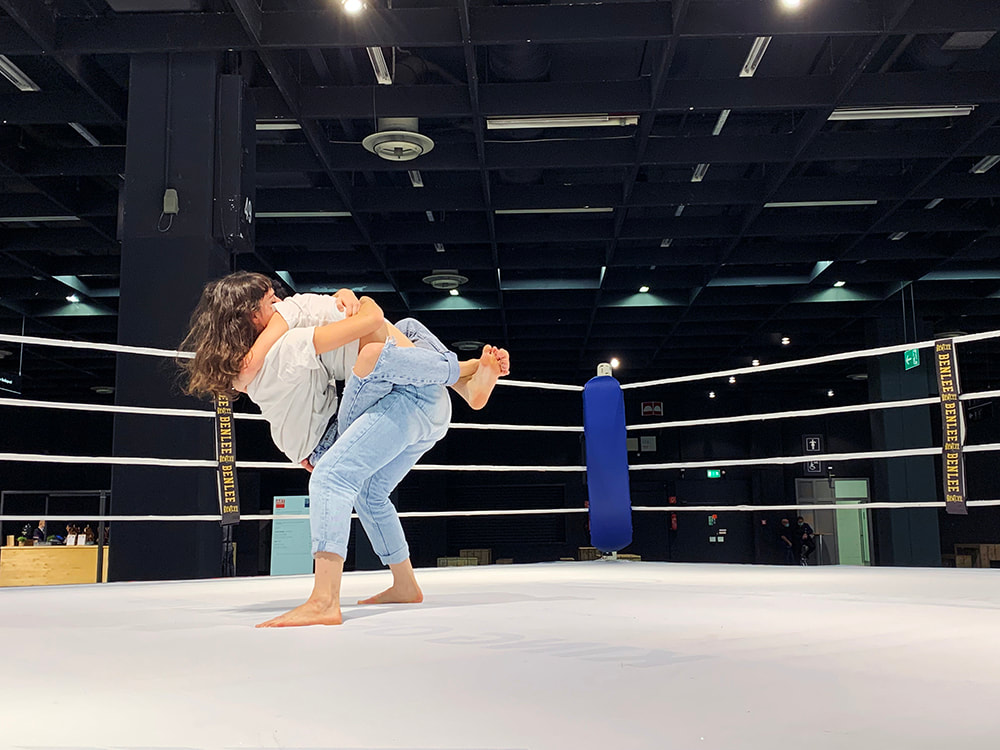 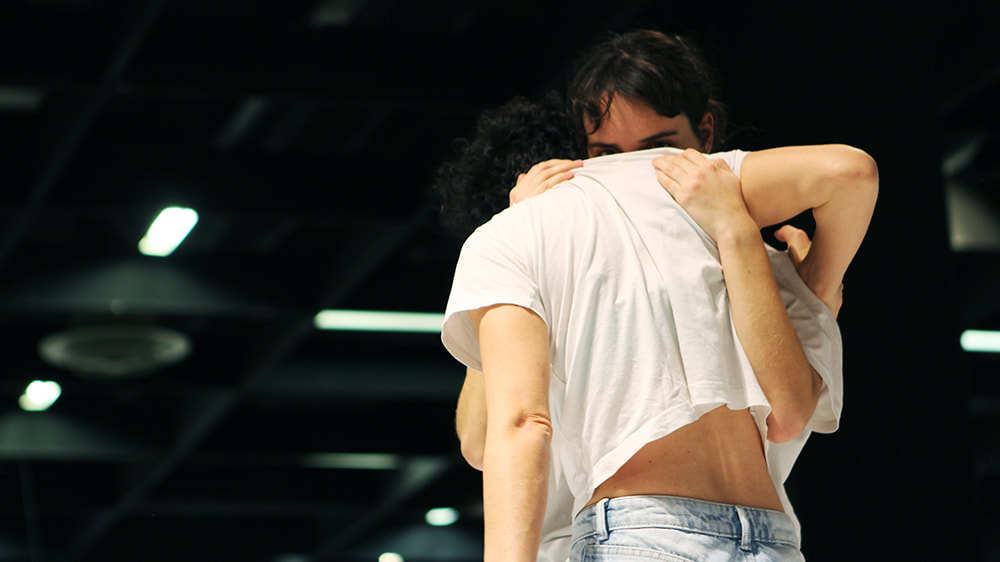 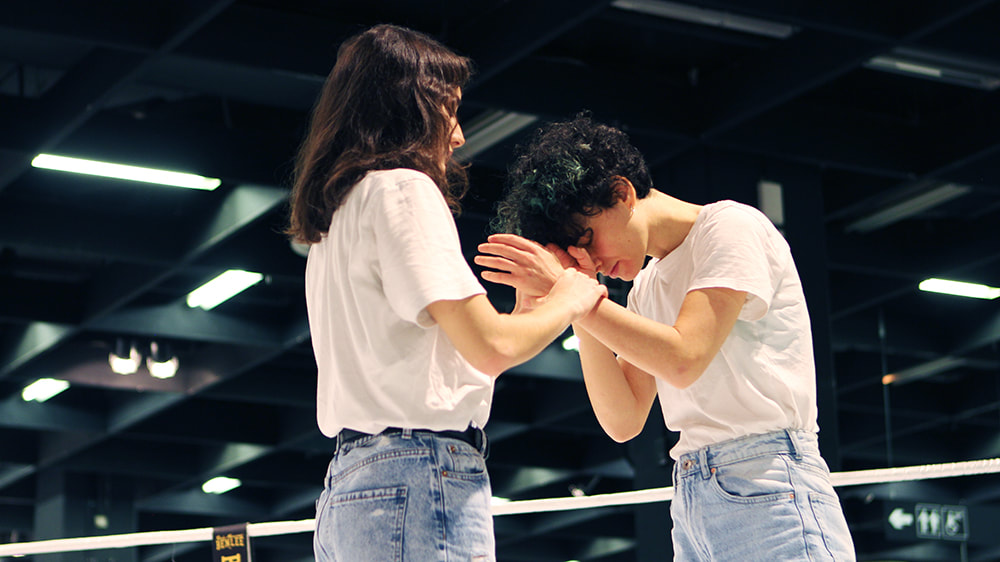 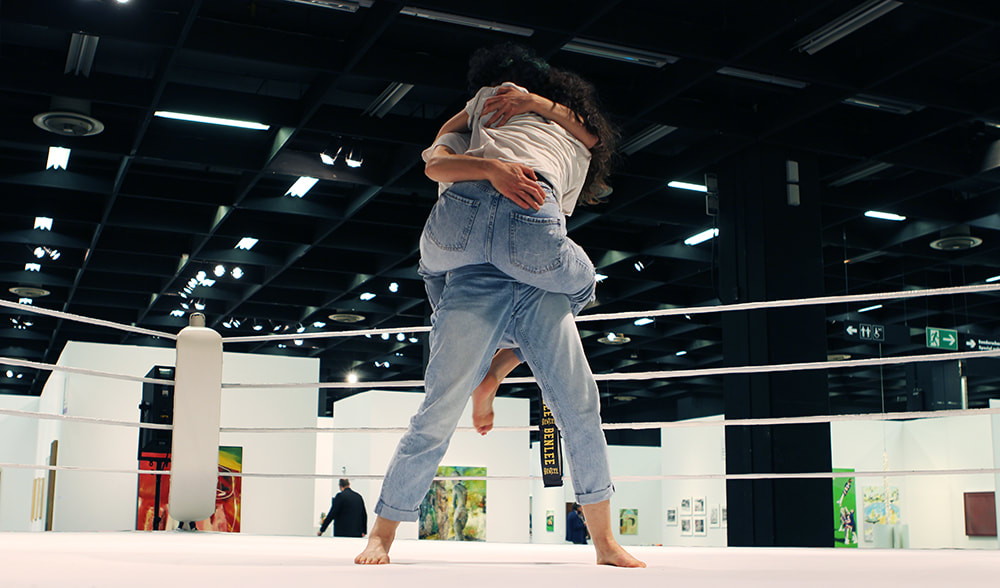 performed in a theater 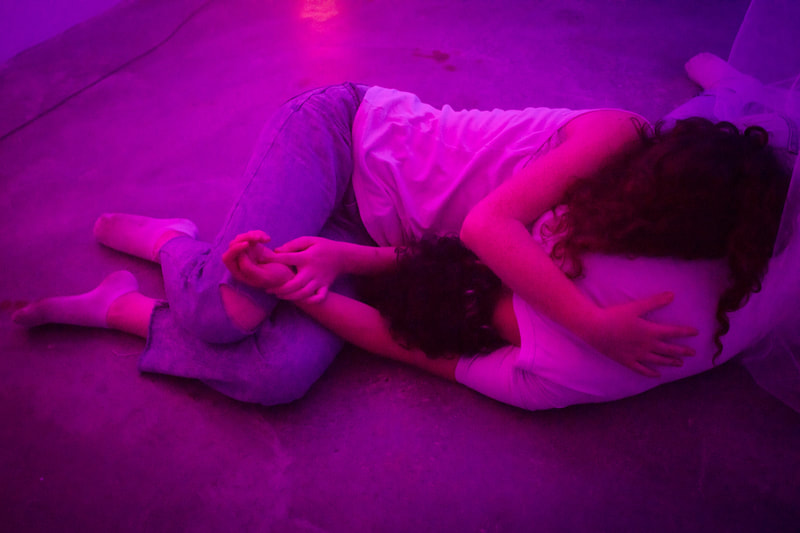 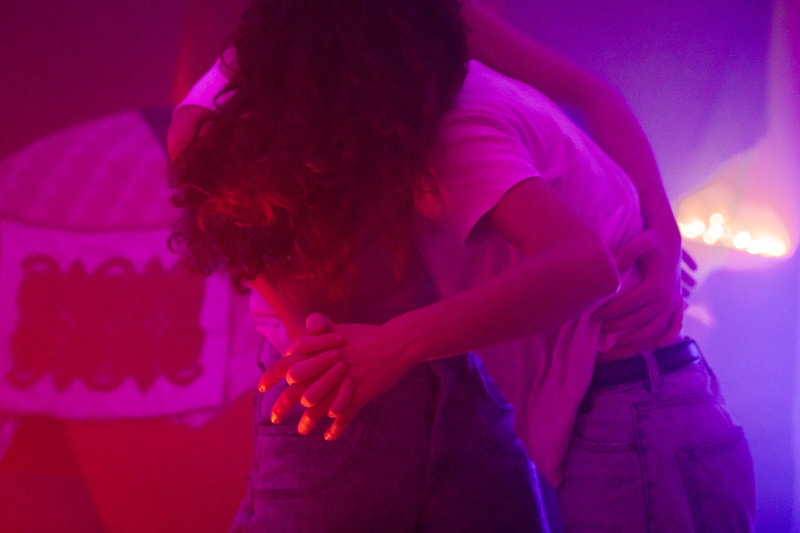 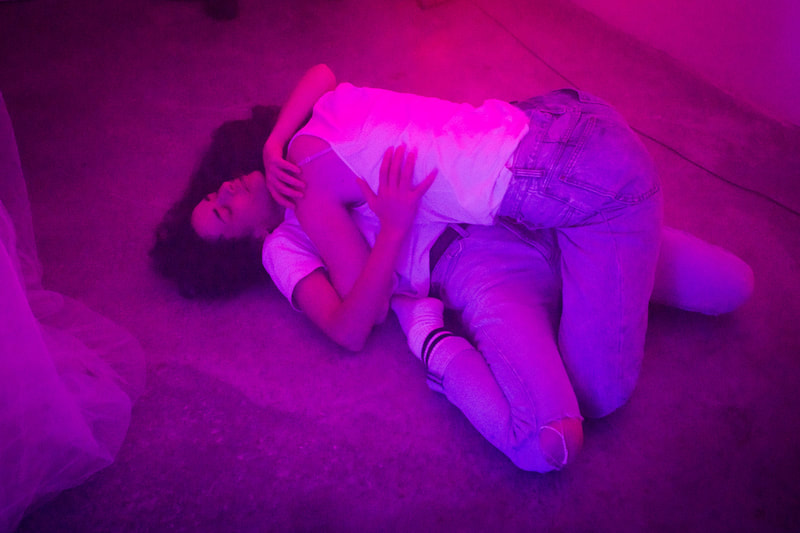 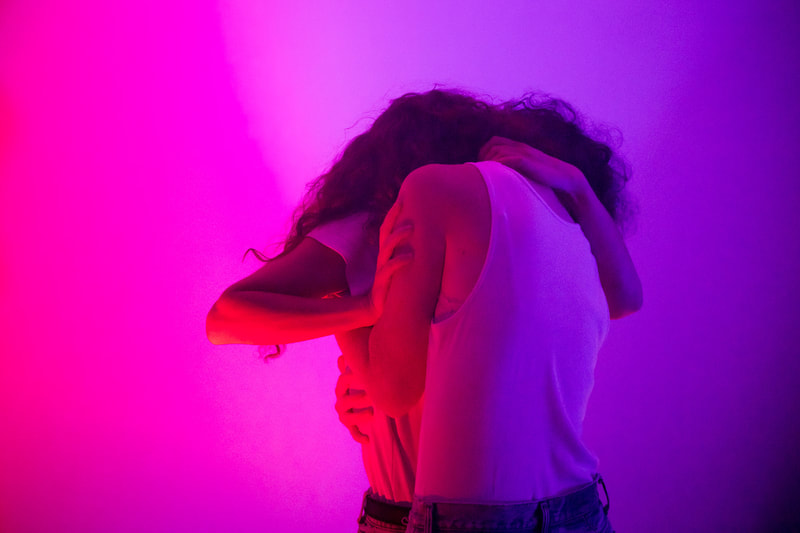